A Separation by Katie Kitamura 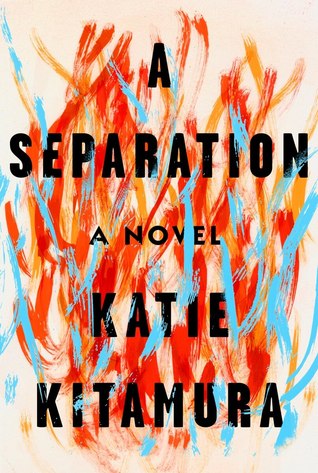 A Separation by Katie Kitamura has very little dialogue, and a parenthetical writing style, which takes a bit to get used to but then completely works. I enjoy reading stories without a lot of dialogue because it puts a lot of strain on the other story elements, and when it is done well it can be great. I enjoy writing without a lot of dialogue because I am remarkably lazy. Katie Kitamura is the opposite of lazy (industrious? I refuse to google) – she is incredibly talented and in using this style she easily manages the emotions of what would otherwise be a highly emotional story and keeps a very specific tone throughout.

I read somewhere that this is another Gone Girl situation and immmmmma stop you right there, Kanye style, and dispel that notion immediately. We, as a society, have to stop doing this fruitless comparison. It is a suspenseful and psychological story and there is a marriage in it and that marriage, of course, needs to end. Comparison over, thank you for coming.

At the outset of the story, a young woman (whose name I’m pretty sure we never find out) has learned that her husband Christopher is missing in Greece. She gets this information via a phone call from his mother, whose calls he has not returned, because she and Christopher have been separated for months and have not spoken for weeks. The mother in law contacts her because she, along with everyone in their lives, has no idea that they have been separated. The wife’s worry propels her to Greece to try to find him, and to finally snap out of her limbo and put the marriage to rest now that she has decided she definitely wants a divorce.

Once in Greece at a hotel in a remote area in the south she is confronted, once again, with her husband’s infidelity and an entire staff of people who probably know Christopher and their secrets better than she. While he has been staying at the hotel for some time, he is most definitely missing, and has been for days. She keeps up the pretense of their marriage as she reluctantly searches for him and we relive the collapse of their relationship and the reality of how little they ever knew of each other through her memories.

A Separation is not really a mystery, though there is a mystery in it. It is not a thriller, but it is suspenseful and mostly it is sad. I listened to it on Audible and the narrator had a monotone that I thought would eventually annoy me, but was actually perfect for this story. The story is slow to build and the style is unusual, but I say give yourself a minute to adjust and it is worth it. I wouldn’t read it in the middle of a depressive episode… but it’s definitely worth the read.

A Separation – Grade B