We’re All Damaged by Matthew Norman 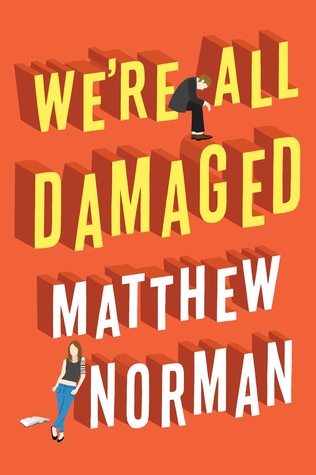 We’re All Damaged is a sort of ‘lad lit’ book. I don’t really use that term, sorry. Not a good start.

Okay, We’re All Damaged is a pretty fun book about Andy Carter having a no good very bad year. He used to have a pretty good life; a wife he loved, a good job, a functional-ish family, and good friends in Omaha, Nebraska. Then his wife left him for a guy who drives an ambulance and he completely loses his shit. In a really, really, funny way.

Our story begins when Andy’s mother calls him, now living in New York and working as a bartender, to tell him that his grandfather is dying and that he needs to come home. He briefly considers not going, because he is so afraid that he will not be able to resist re-opening his wounds, but he gets on the plane and tries to suck it up.

Things do not go well, obviously, he cannot stay away from his ex-wife and her now live-in boyfriend, but this is almost the least of his worries. As the story goes on, we learn all the other ways that Andy went nuts before fleeing the Midwest. Let’s just say that I felt a lot better about anything dumb I’ve ever done after a breakup after reading this book.

There are some good story lines around his family – his mother a Fox News style right-wing radio personality sounding off about the Supreme Court considering gay marriage, his father who is clearly having a little mini-breakdown of his own, and a brother who is so different from him that they can’t even connect.

The writing here is sharp and funny. The ending goes a little off the rails, but I was completely up for it. The new love story with a girl connected to Andy’s grandfather is strange and unique. I enjoyed this as much as Matthew Norman’s previous novel, Domestic Violets, and recommend both.